At the end of March we celebrated our 12th Birthday and sent a few celebration cakes and biscuits to all our offices and depots for everyone to enjoy. Thanks to our team, we have enjoyed another successful year, so to mark the occasion we asked some of our colleagues about the memories and moments that have stood out for them during their time with Aptus…

Jo Singleton, Aptus House Head Office Receptionist
Jo is relatively new to the team, joining as a receptionist in October 2021, but has already become a popular member of the Aptus family. She is the friendly face who greets employees and visitors to Aptus House each day. Jo remarked that she has been struck by the friendliness of the company and that Managing Director Lisa Kerford goes out of her way to put newcomers at ease.

Steve Norris, Electric Project Manager
Steve has been with Aptus for nearly eight years and seen many changes. He commented on the importance of bringing young talent through: “Our industry faces a problem in that many of the existing workforce are coming up to retirement age and, regrettably, there’s historically been a lack of training within the industry to replace this vital skill set. Aptus has addressed this issue head on and it’s reassuring to see the company bringing through new talent and seeing them advance into those roles as new opportunities arise – a process I’m happy to have played a part in.”

George Hothersall, Trainee Electrical Technician
George joined Aptus on a business administration apprenticeship in 2016 and while he was seated near to Steve (Norris), became interested in a role in the electrical department where he progressed into a role as a Trainee Electrical Technician. Fast forward six years and George says one of his most significant career moments came in 2021 when he was given his own vehicle. Having also gained his EUSR and CSCS card, this meant he was qualified to carry out site visits. Now still only 22-years-old George is looking forward to progressing within the electrical team and aims to become an electrical jointing supervisor. He says, “Being issued with my own Aptus van was a big moment for me and shows the company has confidence in me to do my job well.”

Paul ‘Flipper’ Noon, Water Connections Manager
Paul has a background of more than 30 years in the utility sector. As he enters his eighth year with Aptus. Paul says it’s vital to stay one step ahead of market competition. This led to the addition to the fleet of purpose-built chlorination vans in 2018. These enable Paul and his team to adhere to the highest levels of hygiene when delivering our Water Services, which include hydrostatic pressure testing, chlorination and sampling. Paul said, “This investment is essential to protect our clients and ensure our continuing reputation for unparalleled service delivery.”

Lynda Sagar, Operator and As-Laid Surveyor (retired)
Lynda retired in March after five years in her role as a CAD Operator and As-Laid Surveyor. Lynda commented that she was surprised at the possibilities open to her in her later career and this contrasted with starting out in the workplace in the 1960s.
“My line manager recently sat down with me and asked what my career goals and aspirations were! It was extremely encouraging to know there are still opportunities to develop at any age and in different circumstances I might have pursued these. This is just the kind of company Aptus is, and I feel confident that new people starting here will find all the support they need.”

Lauren Dickie, Project Coordinator
Lauren joined a small team in Burntwood in 2019 when the depot had been open for less than a year. She was promoted to Project Coordinator and shortly after, the pandemic brought site operations to a standstill. She observed a difference in the growth of the business post-shutdown as Aptus was awarded increasing numbers of contracts in the region – a trend she says is continuing. During the shutdown Lauren developed a raft of new technical skills through the transition to digital processes and this has helped with her job. Lauren is now happy to be back in the office and enjoys the social interaction with her colleagues. “We are experiencing rapid growth here and it’s an exciting time for the Midlands business.”

Brandon Ashton, Trainee Quantity Surveyor
Brandon joined Head Office as a Trainee Quantity Surveyor in 2021 after graduating from Salford University with a BSc (Hons) degree in Real Estate Surveying. After a successful interview with Commercial Manager Grant Smith, Brandon was soon in his new position supporting the finance and commercial team. He says, “I’ve been made to feel very welcome at Aptus and have already been out on a few site visits. It’s a great time to join the company and I’m excited about my career prospects as Aptus grows.”

Lucinda Coyne, Technical Design Coordinator
Lucinda has been with Aptus since April 2019 and was one of four internal candidates recently appointed to Multi Utility Trainee Designer with training starting in September. Lucinda said the company is growing all the time with new jobs coming up and the chance to develop new skills. She said, “when the MU design role came up it was such a good opportunity, I had to apply. I love the people here and want to stay with the Aptus family and progress!”

Nicholas Robson, Project Manager
For Nick working at the Follingsby depot within a small team has presented exciting opportunities and a recent new challenge as Project Manager. He was promoted to the role after a two-year training programme. Nick says since he joined, he’s been keen to progress and feels that his own ambitions have aligned well with the company’s – something that his boss Regional Manager Steve Chesworth was quick to identify. One of Nick’s personal memorable moments came at the Aptus Annual Awards in 2021 when he was awarded Trainee of The Year. He said, “It’s nice to be recognised. This achievement reflects on our whole team and the good work we’re doing in the North East.”

Jack Berry, HSQE Administration Assistant
After joining on a business administration apprenticeship in 2019, Jack has been a core member of the health and safety team. He said one of his highlights was when he was trusted to visit site alone in an auditing capacity. Since completing his apprenticeship Jack has gained a number of HSQE qualifications and recently embarked on a 12-week NEBOSH accreditation. Jack said, “From the age of 18 I’ve had a development plan that set out all the targets I need to achieve in my goal to become a Health and Safety Advisor. I’ve been placed on courses from NRSWA Streetworks to gaining my CSCS card and now I’m working through NEBOSH – I couldn’t ask for better support.”

Diane Bassett, Accounts Ledger Administrator
Diane joined the accounts team in 2015 and has seen the company evolve from a small business into a big player in the industry. Reflecting on the private equity investment in the company in 2019, she said this was a significant moment for the business supporting growth and safeguarding jobs. “Aptus has grown, gaining the expertise to scale up, increase job opportunities and ensure job security for the existing workforce, notably those reaching retirement age in the next few years.”

Roger Collier, Former Gas Technical Support Engineer (retired)
Roger recently retired having played an integral role in getting Aptus established. On leaving, he said: “It has been a pleasure working with everyone I have met at Aptus over the last 12 years. First and foremost it is the employees who make a company and you all have contributed to making Aptus one of the leading Multi Utility companies in the UK. From Brian Cutler, Roger Burke and myself getting all our accreditations and working in each other’s houses to where the company is now is a marvellous journey.”

Here’s a look back on the last year and some of our highlights in numbers! 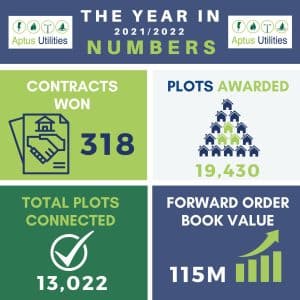 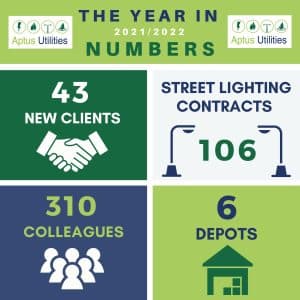 Aptus Utilities ·
@AptusUtilities
👷‍♂️We're recruiting Multi-Utility #apprentices to support our growing #Midlands operations! Our scheme is award-winning and a great way to start your career with Aptus. Check out the details👇
📅Apply by 30th June to be considered!
More info ➡️ https://t.co/70ZTeSISTm #gcses2022 https://t.co/yXgbFFnIeU
View on Twitter 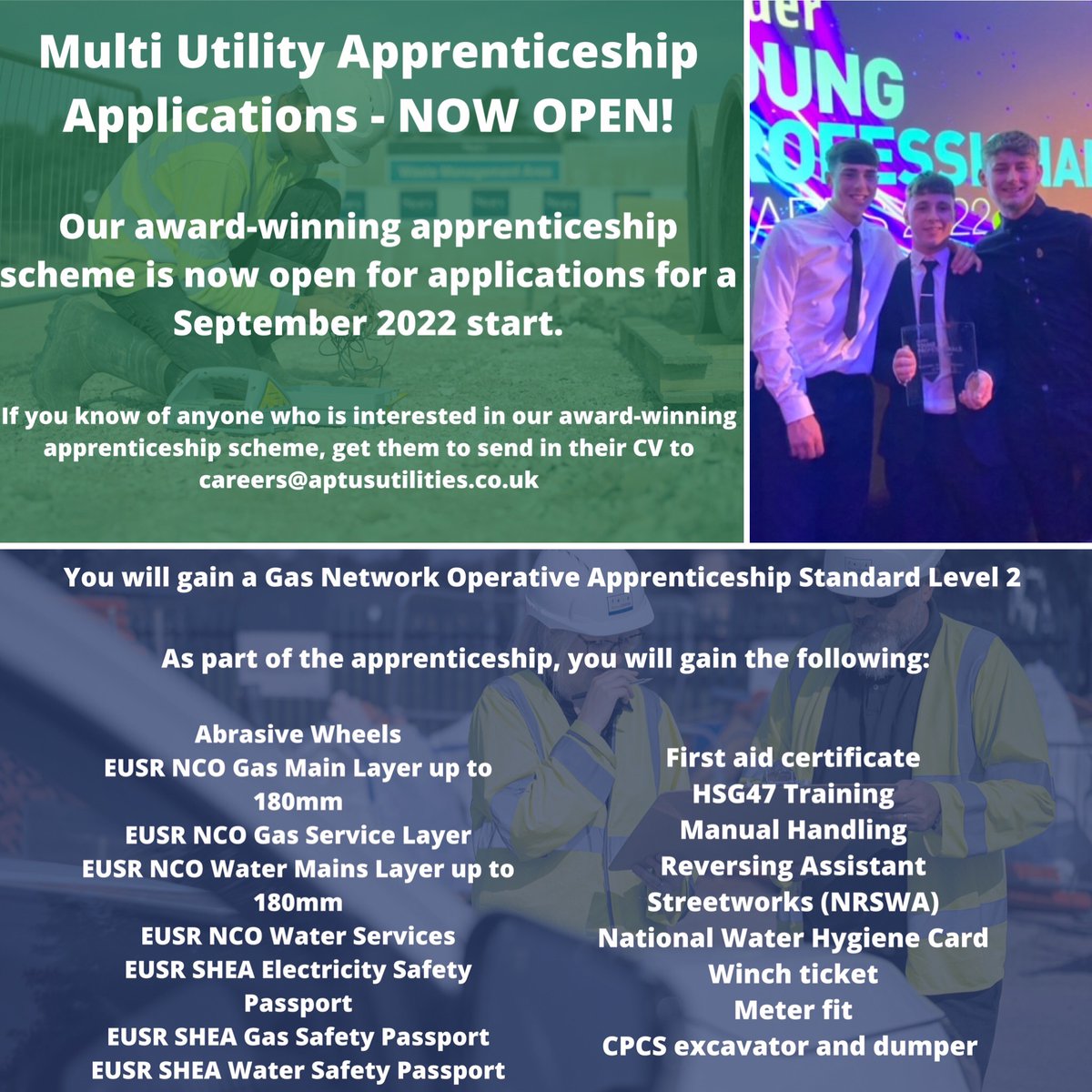