The inaugural Wear Red Day was organised by the Westhoughton Poppy Appeal to raise funds for the Royal British Legion which supports members and veterans of the British Armed Forces and their families, as well as championing Remembrance and honouring the fallen through education and events. 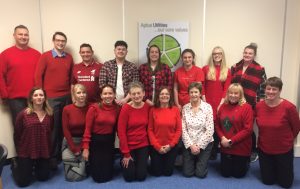 On Wednesday 7th November the office was a blaze of scarlet and made for a poignant reminder of the sacrifices made, and which continue to be made every day by men and women in the service of our country.

In total Aptus Utilities raised £850 towards more than £6K raised in Westhoughton overall by wearing red and contributing to the Poppy Appeal as well through the purchase of giant poppies which were displayed on the company’s fleet of vehicles.